Within the context of a horror film, this three-pronged tensional dynamic highlights the unique vulnerabilities and conflicts of the ‘guilty’ mom and creates an avenue through which viewers experience Jacques Lacan’s Real. Lacan’s Real is the uncanny location between the conflicting imaginary order and symbolic order. The Real creates the impossibility of absolute comprehension. Not being able to understand something when one’s life is at stake is frightening.
The imaginary order is the part of human consciousness that exists without language and expression. In the imaginary order, the self is connected to others, objects, and the world. This order is without boundary or definition; it is the fantasy image of self. It is narcissistic, fueled by unsatisfiable demands. It is the order of the maternal. The mother, in her traditional role, exists in the imaginary order with the child. She protects the emotions of the child and creates emotional safety. For these reasons, the traditional maternal role is associated with the imaginary order.

The imaginary order is separate from the symbolic order. The symbolic order is the place of self that is expressed through language, the place ruled by societal demands, norms, rules and expectations. It is composed of a narrative, concrete and defined by the absence or presence of objects and ideas. It is this aspect of self that affords the ability to deal with others and to be part of a community. It is characterized by desire, by want.  The father, in his traditional role, protects the worldly safety of the child and guides the child into that place where norms dictate behavior and rational thoughts are expressed through language. Thus, the traditional paternal role is associated with the symbolic order.

The Real is the place between the imaginary and symbolic orders. It is the incomprehensible, undefinable space beyond rational thought, although it does contain knowledge. It cannot be expressed in spoken or written language and so is not fully comprehensible or communicable. That is not to say it is inherently irrational or inherently anxiety producing. There are pleasant ways to experience the Real. Being curious or intrigued, for example. Wondering about something while still feeling in control of one’s thoughts, while knowing there are no harsh consequences to not know—these are safe, if not productive and pleasant ways to experience the Real. However, the Real is undefinable and thus uncanny by its very nature. Additionally, it is unique to each person and so not uniformly shared. It is undefinable, yet familiar. It exists, and must exist, but is not explainable nor controllable. The ‘guilty’ mom situation drives the mother, the child, and the viewer into the Real. It is in this incomprehensible abyss that the battle against evil takes place. 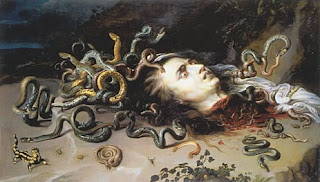 The mother figure is vulnerable because of her inability to become fully incorporated within the paternal symbolic order. Without this empowerment, she does not have access to the resources necessary to negotiate the story terror. She may be denied access altogether or she may be forced to back channel her way in, managing a delicate balancing act of pretending the situation isn’t present while also attempting to get help. As a result, she silences the child and forces the child back into the imaginary order, although not intentionally, insofar as this limitation happens via her own inability to gain access into the symbolic order. She has a sense or knowledge that she shouldn’t cling to or smother her child, yet her guilt may cause her to over-nurture the child, keeping the child ‘trapped’ in the imaginary order and without access to the language and rational thought of the symbolic. She, herself, is disoriented, drifting in the Real, a place with no understanding or solutions.

Children are by their nature vulnerable; however, the horror film child faces challenges that amplify that vulnerability. In the situation of a guilty mom horror film, the child is dealing with two threats. One, the evil force that terrorizes, and two, the mother who either suppresses and smothers or silences and rejects. The threat created by the guilty mom is uniquely terrifying. Barbara Creed, in The Monstrous-Feminine, notes that “monsters frighten, in large part, because they recall our previous stage of development when we were not separated from the body of the mother.” A child who is forced into that place of development where they are part of the mother, especially when the mother herself is a threat, is struggling within the incomprehensible Real. The child’s location within the Real is complicated by this cyclical conflict. Intuitively, the child knows there is a problem. Using language, they seek help from their mother and in the lack of assistance or rejection are forced back into the imaginary, emotionally-based, pre-Oedipal stage. This regression is uncanny, distressing, and denies the child agency. The mother, wanting to control the situation of the child and keep the child’s needs from usurping her own, continues to smother or silence the child. Without the ability to express the need for help or the ability to understand their situation and thus protect themself from the terror, the child is even more exposed and vulnerable. This vulnerability is reinforced by the mother’s response to her guilt, the silencing or over nurturing. Due to the distress that the child experiences and causes, both mother and child are rejected by the community or society. The child experiences that rejection and begins to fear or reject society in turn. They are shut out of the symbolic order by both the larger group and by the actions of the mother and now must fight the terror on their own.
Stefan Gullatz, in his work analyzing contemporary horror through Lacanian theory, discusses the impact of films like Hellraiser, in which the lines of reality are blurred. He asserts that the true terror stems from the viewers inability to determine the location of the action.

The ‘enjoyment’ at stake…appears to be the horrific, excess enjoyment of a desire that has come too close to its object. The fact that such films, despite their traumatic impact, may nonetheless be mesmerizing may be in part linked to their existential dimension, their ‘revelation’ of the real of our desire underlying the fiction of symbolic reality. One is reminded of the unbearable but nonetheless revelatory encounter with the real at the ‘navel’ of a dream or nightmare, which causes the subject to wake up in order to enable him to ‘continue dreaming’... to preserve the comforting illusion of a stable social self. Such films can therefore only enjoyed retroactively, from the perspective of a more distanced reflection that facilitates a symbolic re-inscription of the traumatic experience.
Adding this additional layer of mental and emotional confusion to the uncanny situation of a guilty mom is an effective strategy for horror writers.

Ready for more? Guilty Mom Horror Part 4: Examples? Compare and contrast, see it in action.
Posted by Author Isabelle Drake at 7:30 AM