WAM, wet and messy fetish, is exactly what it sounds like. A person becomes sexually aroused by seeing a slick mess-covered person or being messed with a streaming liquidy substance. Dirt, oil, paint, shaving foam, whipped cream, slime, ketchup…if its slick and has the potential to coat and make a mess, it’s good for WAM. 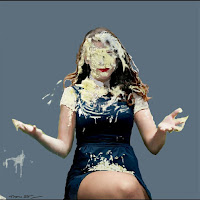 People with this interest refer to themselves as messey fun folk, sploshers, and wammers, and may prefer to have the mess applied to themself or prefer watching it be applied to others.  Those who prefer to get messy themselves enjoy the feeling of the substance on their skin, the overpowering scent of it as it coats them or the sensation it creates when interacting with others. Or, it may simply be the idea of being “a mess” that turns them on. For others, its not getting dirty themselves, its seeing the mess on others that does it.

In either case, the substance may be applied to bare skin or inside or over clothing. In the case of being applied under or over clothing, while white is a popular color, anything goes--bathing suits, formal wear, uniforms, wedding dresses, full PVC or leathers. The individual may have a specific clothing preference or maybe not.

What’s hot about girls getting hit in the face with pies or guys being covered with green slime? As this fetish is one of the less common, and seemingly less controversial than others such as bondage or pony play, there is not much research on why some individuals are turned on by WAM fun.

One possibility is that individuals with low tactile sensitivity benefit from the extreme and unusual sensations. The theory is that an early experience became a formative one. For example, playing in the mud as a child enabled the person to feel more fully and more completely than was typical and so the mud becomes a cue for a positive physical sensation. This theory, the early imprinting of relating sexual satisfaction with a childhoodexperience is often linked to the WAM-related “wet-look” fetish in a way thatdoes not include low tactile sensitivity. So it makes sense that perhaps the WAM interest starts that simply. A guy wrestles with a girl in the mud, goofing around as a kid, and likes it in ways he doesn’t expect. Years later, he’s wanting that mud again.

Another possibility is that this fetish is linked to humiliation. In WAM, however, the humiliation is much more light-hearted than in traditional humiliation fetish acts, such as name-calling or being treated like an animal. In this way, it is = possible that there are links to from WAM to Dominance/submission interests.

Lastly, there is the obvious, that being bad, in this case by making a mess of oneself or others, is a source of rebellion and is therefore freeing and ultimately fun.

Fun appears to be one of the key components of this fetish. When compared to other fetishes this one may seem downright silly. Pies in the face, ice cream melting across thighs, hair coated with mud. The slapstick aspect of this interest is very serious. 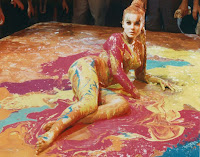 Wondering if you’ve even seen WAM in action? Remember thescene in Tommy when Ann-Margret gets sploshed by foam and baked beans then rolls in some mud? Or how about that time in The Swinger when she was coated with paint then rolled around on the floor?

Posted by Author Isabelle Drake at 11:27 AM