Cowboy for Hire now in Paperback

COWBOY FOR HIRE by Isabelle Drake 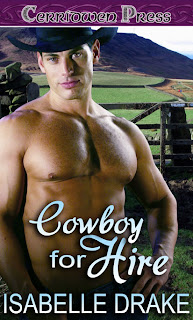 Lang Thompson eased his foot off the worthless brake pedal and waited for the red Arizona dust to clear. A board swung above the cab of his truck, once, twice, three times. The rusty nail holding it gave up the fight and the weathered two-by-four smacked across the hood with a weary thump.

He pushed back his beat-up Stetson, mumbling a string of words that in his childhood would’ve earned him an afternoon in the milk house. He didn’t need this.

Outside his window a hairy, black Australian shepherd barked and waved its tail.

For a split second he considered backing out and leaving. The way the place looked, the owner probably wouldn’t even notice the new gaping hole.

No, he didn’t want any unfinished business hanging over his head when he hit the highway again to head south, away from the miserable memories he’d left behind. There was that and the fact that his conscience had an unfortunate way of popping up at the worst times.

He glanced down at the animal now sitting among the rubble that used to be the side of a barn. A tired, seen-better-days barn but a barn nonetheless.

For the sake of his furry witness, he held back another string of words unfit for delicate ears as he shoved the door open and stepped out. He leaned against the truck and yanked his hat down to block out the afternoon sun. The owner had to be around somewhere.

“I guess I should’ve hung a no parking sign there.”

Lang turned to the shapely outline in the shadows. His bad luck kept getting worse. A woman. He didn’t want to shoot the breeze with a bored rancher’s wife.

“If you’ll tell me where to find your husband, I’ll straighten this out with him.”

As she moved into the sunshine Lang tried to convince himself he didn’t see her thick blonde hair or clear, blue eyes. He didn’t notice the way the way her breasts strained against that plain white t-shirt tucked neatly into her faded jeans, either. And that bolt of physical awareness that shot straight to his cock? It didn’t exist.

A blindingly bright smile spilt across her sun-kissed face. “I can’t do that.”

No, those sweet lips didn’t really have an effect on him either. But just to be sure, he stepped away as she came closer. “Do what?”

Raising her hand to shield her eyes from the desert sun, she glanced over her shoulder toward the mess. “Did you plow into my barn because you suffer from memory loss?”

Lang turned toward his truck. He had indeed plowed into the barn. Her barn. “Your barn?”

She nodded, then reached down to rub the dog’s ears, giving him the perfect opportunity to look down her shirt. Was that a white bra with pink lace trim?

Forcing his gaze back to her face, he asked, “You don’t have a husband I can talk things over with?”

Sunlight blinked off the golden strands of her hair as she shook her head and scratched under the animal’s chin. Her silence didn’t make sense. Why wasn’t she pissed? “Look, ma’am, I’m really sorry—”

While waving her hands to cut him off, she moved closer, her sexy, long legs making short work of the distance. “You don’t need to explain right now.”

Judging from the tilt of her head and the welcome in her eyes, he was missing some piece of a puzzle.

He stamped out his curiosity. He only wanted to take care of business, then get back on the road and find that ranch for sale his cousin Cole had badgered him into looking over. With that out of the way, he’d get back to his real goal, which was putting as much distance between the remnants of his old life and himself as possible. He tugged his gaze away from her all-too-easy-on-the-eyes face, glanced around but soon found himself looking her way again. “Where am I anyway?”

Her delicate eyebrows knotted together and her shoulders dropped. “You didn’t come about the ad for work?”

“Work?” He shook his head. “No. I was trying to turn around, get back on the freeway.”

Her kissable pink lips curved weakly, the glimmer in her eyes faded but didn’t go out completely. “You’re at The Circle Cat Ranch.”

“And where is that?”

“Cactus Junction.” She dipped her head the other way and a few tempting strands of silken hair slipped over her shoulder. “You do know what state you’re in?”

Arizona. Only a couple of hours from the Mexican border.

Her gaze circled his face, considering, then dropped lower, assessing. He straightened, planting his legs wide enough to place the bulge in his pants front and center. If she insisted on getting a good look at him, he might as well give her a view worth the effort.

As though she realized she was rudely looking him over like he was a colt on the auction block, she brought her attention back to his face and tried to cover her actions with a smile as she spoke. “You look like you could use a drink. I know I could.” She brushed past him without waiting for a reply. “Come on up to the house and have some lemonade.”

That place his cousin was so hot for them to buy was in Cactus Junction. At least he didn’t have much farther to go.

Not that he wanted to buy a place and start all over but Cole had cajoled him until he’d agreed to at least look it over. A promise is a promise. Even to a cousin like Cole.

The woman’s hips swayed invitingly as she strode toward the house. Each determined stride called to some better left unspoken part of him.

He grumbled and tore his gaze away. He’d written complicated entanglements with women off. For good.

The screen door smacked shut after she disappeared inside.

Why did it seem like the last shred of control he had over his life was slipping away? The hot wave of lust pooling in his gut shouted a warning, telling him to forget his so-called integrity and take the chance that once he got on the road he wouldn’t need brakes any time soon. He could always coast to a stop.

He groaned. All those hours in the milk house taught him more than to mind his tongue. He had to stick around and settle the issue at hand. That ranch for sale wasn’t going anywhere. With a quick glance down to be sure he wasn’t wearing any of his fast food breakfast on his shirt, Lang headed after the woman and the dog
Posted by Author Isabelle Drake at 8:21 AM