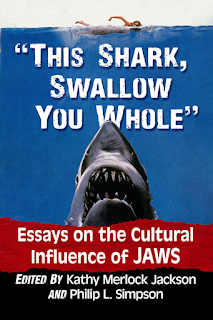 One of the most influential thrillers in media history, Jaws first surfaced as a best-selling novel by first-time novelist Peter Benchley in 1974, followed by the 1975 feature film directed by Steven Spielberg at the beginning of his storied career. Jaws is often considered the first "blockbuster," and successive generations of filmmakers have cited it as formative in their own creative development.

For nearly 50 years, critics and scholars have studied how and why this seemingly straightforward thriller holds such mass appeal. This book of original essays assembles a range of critical thought on the impact and legacy of the film, employing new perspectives--historical, cinematic, literary, scientific and environmental--while building on the insights of previous writers. While varying in focus, the essays in this volume all explore why Jaws was so successful in its time and how it remains a prominent storytelling influence well into the 21st century.

My chapter, "Struggling Against the Tide: Narrative Structure and the Human Connection in Jaws," examines the narrative structure, the character's journey, and the postmodern era of the 1970's.

Get your copy on Amazon and the publisher's site. 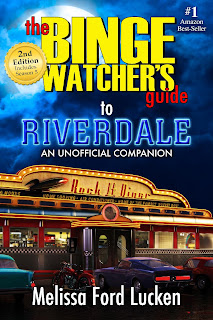 Busted families, broken hearts, secrets and corruption are the lifeblood of The CW’s gothic horror series Riverdale. The show is based on the original Archie comics, but this sinister town is a far cry from the wholesome, anyplace USA depicted in 80 years of the teen adventures featuring Archie, Jughead, Betty, Veronica, and the rest of the gang. This Riverdale is an other-worldly, ominous place where enigmatic parents and cunning town leaders hide wicked secrets while teens struggle to survive.

The Riverdale gang face the definitive dilemma: good vs. evil. They fight ghouls, a cult leader, a serial killer, and each other—all while sporting inspiring outfits and photo-ready hair. Great music, the occasional Vixens cheer dance-off, and too-steamy-for-high-school sex scenes add an undeniable layer of watchability to the fan-favorite show.

This Binge Watcher’s Guide will get you through the first four seasons. Keep the book beside you while binge; the trivia, quotes and episode commentaries will inform and entertain. Want more? The literary analysis, connection to the comics, and resources have you covered.

Get your copy on Amazon and the publisher's site.

Melissa Ford Lucken, aka Isabelle Drake, holds an MA in Special Education from Eastern Michigan University and an MFA in Creative Writing from Boston College’s program at Pine Manor College. She teaches creative writing and composition at Lansing Community College.