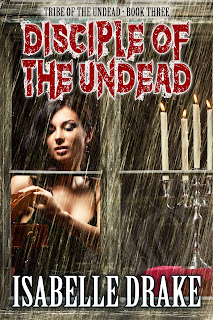 The city of Boston has a new infection, the Tribexx fandom. Tribexxers imitate the perverted and cruel lifestyle of the Tribe of the Undead, the mythical sex-cult zombies that capture humans to use as sexual servants. Its all fun and games, they say, because no one actually gets hurt.

Reluctant rich kid, Nidhi Bansal, made some mistakes. Now out of rehab and in a prestigious graduate program, she’s walking the straight and narrow path to a respectable professorship. Hooking up with a tantalizingly dangerous girl who seems to have two things Nidhi wants—sexual adventure and inside information—rapidly goes from difficult to dreadful. Nidhi’s research and relationship drive her deep into Boston’s most deviant crowd, a group of elites who do not want to be disturbed.

In a city that thrives on wealth and power, everything is up for grabs.

DISCIPLE OF THE UNDEAD, can be read as a stand alone, but if you haven't read books 1 & 2, why not start from the beginning?