Beer, conversation, music--for me these things lead to BIG ideas. About a year ago, the big idea was doing an anthology with two of my friends. One of the friends, Holly Halsey Mayes, wasn't present but that didn't stop Alexandria Sure and me from deciding she was in on our idea.

We tossed around some classic romance themes: second chances, workplace, holidays, fantasies—and finally settled on mistaken identity. The idea of wanting to be someone else for a day, a week, or for however long, appealed to us because, well, we understood that. The grass is always greener, and all that. Of course, our character’s thought so too, but after only a few pages, they realize we have some consequences for them. There are happy endings all around as well.

We settled down to the writing, got together for write-ins and planning (cover, editing, promotion, formatting) and now, we have the anthology! 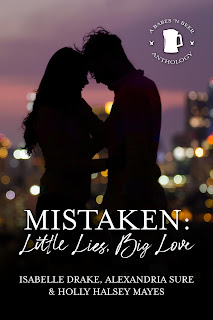 Motivational speaker and personal improvement expert Jaya Vinar is out of control--or so people keep telling her. When her boss pairs her with a handsome personal consultant, things get even more out of control. She wants to scare him off, he wants her in his bed. Only one can win. And neither one is exactly who they’re pretending to be.

Sometimes wild, and rocky, starts lead to even wilder, and happier, endings.

Jaya paused outside the hotel room, staring at the number 726, posted on the right side of the dark brown door. The late-night crowd had gone to bed hours ago, leaving the hall empty and the row of rooms quiet. With the elevator only yards away, a few steps was all it would take to head back to her own room and forget the whole thing.

She wasn’t going to walk away. She wanted this. Wanted him.

After several heavy beats, the door swung open and he was there. Despite the late hour, he wore a navy suit. He even had on the tie. The bright white shirt collar cut against his skin, emphasizing the rough, late-night stubble. No smile, no hello. He just stepped back and motioned for her to come in.

The heat of his body caressed her as she passed him in the small hallway. She heard him follow her as she moved into the room, felt him behind her when she stopped. The intensity of his presence was so intense, so piercing; it was painful.

What a magnificent pain it was.

His suite was larger than hers, with a sitting room separate from the bedroom. A floor-to-ceiling window offered a view of the glittering city. There was a balcony with two padded chairs and a low glass-topped table. She could tell by the arrangement of the room they wouldn’t be spending time out there, enjoying the view or the crisp night air.

Jaya moved in, feeling the heels of her pumps sink silently into the plush carpeting. She felt the hem of her dress brush the back of her thighs and the tug of her garters on her inner thighs.

“I see you followed the instructions on the dress. Are you wearing everything I sent?”

Thinking about the box that’d been delivered to her room an hour ago, she nodded. She’d followed the instructions on the card, putting everything on slowly, savoring the moment. Simply touching the intricate pink lace bra and matching garter belt had made her shiver with anticipation.

“I can tell by the look on your face, you are uncertain.” He came around, stood beside her and touched her elbow. “You don’t have to trust me. You just have to do what I say.”

Heat skittered up her arm, worked across her breasts, making them swell and become heavy.

Following all of his instructions had been one of the requirements on the note. By coming to his room, she had agreed to do the other—follow his commands without question.

With a slow, deliberate gesture, Connor pointed to a chair. “For now, I’ll accept obedience. The trust will come next time.”