Servant of the Undead: Undead seeking human captives. A blizzard and raw desires. Passion and fear. 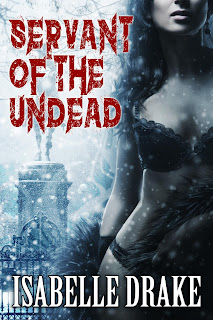 Servant of the Undead

Undead seeking human captives. A blizzard and raw desires. Passion and fear.
~~~
Boston is hostage to a blizzard & rumors spread about zombies roaming the streets, looking for human flesh. Hayden Thomas, tabloid writer, is out to get some fresh news about the undead. At the Boston Public Library, he uncovers research about a tribe that survives by having constant sex with human instead of eating their flesh.

Mattie, one of the undead out tracking a rival tribe, finds Hayden and uses him for sex. Afterward, she discovers his research and acquires him as her sexual servant, planning to use him for information as well as sustenance.

Hayden Thomas shifted on the wooden captain’s chair, trying without success to ease the stiffness in his spine. Whoever selected the chairs for the Boston Public Library obviously never sat in them. The damn things had no armrests and were crammed so close together Bates Hall looked like a cafeteria.

Except for the green desk lamps and rows of bookcases lining the wood paneled walls of the vast, deserted room. Hayden leaned back, placing his palms on the small of his back as he stretched.

Fine, it did look like a library. And it was everything the city claimed it to be, historical, well-cared for, and a fucking architectural gem. He just didn’t want to be there, digging through old books sane people shouldn’t care about. As if on cue his phone flashed. He picked it up and read the message. That article will be done tonight. Right? You’ll have something fresh. Right?

As if he had a choice.

Hayden tapped in his reply, yes and yes, then shoved the phone in his pocket. He wasn’t going to look at it again until he had what he needed. Something fresh. What the hell did that mean anyway? A paycheck. Control over his future. Little things like that. So he’d come to the library, to look through actual books. He’d scanned through several about werewolves then set aside the ones on vampires when he found the ones he needed.

Coming to the library had been a good idea. Not only had he found fresher content than the guys only using the internet, he’d also made a video clip of the inside with his webcam. He might be able to use that on the paper’s website as part of the series. A scholarly approach to give the piece an air of authority. Bob would love the irony of that.

“Lights in this section getting turned off early. ‘Bout twenty minutes.”

The security guard had come up behind Hayden and was standing in the aisle between the rows of gleaming wood tables. He motioned toward the expansive windows that started at the top of the bookshelves and reached up about fifteen feet to the domed ceiling. “Snowmaggeddon, man. Everybody’s leaving. You should too.” 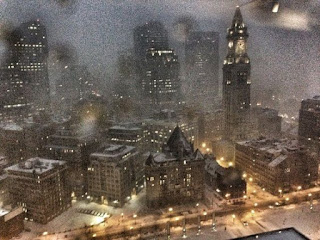 Outside, snow whipped against the glass, so fierce and bright that even though the sun had gone down an hour ago the white blast was still visible. The bloated flakes brushed against the glass, spun in circles, creating a delicate, menacing spiral. Shit. A storm. As if he didn’t have enough to deal with. He’d promised Rachelle, a girl he’d started seeing, that he’d be done with the article that night so they could “do something fun, something crazy” tomorrow. Hayden eyed the stack of books surrounding his laptop.

“Do you have a photocopy machine?” he asked, scanning the area behind the guy.

“Yeah.” The guard looked at the piles of books, his mouth twisting into a frown as his gaze skimmed over the titles. “Where’d you find those?”

“In the scary monster section, under Z for zombies.”