The Irishman, Book to Movie Interview with Author and Agent 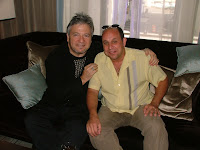 Lawyers write. They write briefs, opinion letters, memos, contracts of all sorts and sizes, wills, trusts—I could go on forever. Many write fictionalized stories based on events that happened during the course of their careers. Some of those stories are published and some are made into movies. How does that happen?

Recently I met with Rick Porrello, author of “To Kill the Irishman, the War that Crippled the Mafia” and his agent, Peter Miller, of PMA Literary & Film Management, Inc. They were in Detroit to assist with the filming of the action movie based on Porrello’s book, the true story of mobster, Danny Greene, a violent Irish-American gangster who competed with the Italian mob in 1970’s Cleveland--a competition that provoked a country-wide turf war.

Code Entertainment is producing the movie, which stars Ray Stevenson as Danny Greene, Christopher Walken as loan shark and nightclub owner, Shondor Birns, and Val Kilmer as the Cleveland police detective who befriends Greene. Jonathan Hensleigh directs the film. “They plan to release it by St. Patrick’s Day,” said Porrello.

Porrello, now Chief of Police in Cleveland, wrote his first book, “Superthief,” about his mobster grandfather and uncles who were killed in the early 1930s by opposing factions of the mob. “I started “The Irishman” immediately after my first book. My wife and I opened a bottle of champagne when we got the author’s copies, and I said I would never, ever do this again. But once I got those books in my hands, I thought ‘I’ve got to do this again, very soon.’

I self published “The Irishman.” I couldn’t come to terms on a deal with my original publisher so I decided to self-publish the book.” When it came out, two movie companies got in touch with Porrello, wanting exclusive movie rights. “I had no idea how to decide between them. I contacted Peter (Miller). He read the contracts, negotiated for me, and advised me which deal was best.” Code Entertainment bought the movie rights. “That was eleven years ago.”

“Where we are now,” said Miller, joining us after one of his many phone calls, “with the movie in production, and the book going to be published by Simon and Schuster, and I’m now going to auction it off in England and Ireland, is where we want to be.”

“It is not easy getting a movie produced. It has gotten much more complicated. There are two ways to make movie deals. One is you work with a studio, sign a contract with them, and you are at their complete mercy. On those deals, I get a fee as an executive producer and they buy the movie rights. That is plan A.”

“Plan B is an independent deal. Code Entertainment has five investors. We wanted to do it as a bigger movie, but the actors wanted a bonus package to be able to bring their entourage. You would not believe what these actors bring to the table—‘an extra non-accountable one million dollars for their chef and their barber and their baby sitter and on and on.”

“This is very important to Rick, I am proud that we worked for a long time to accomplish this. And the script is dynamite. This has been a long road for Rick, but it is a good road, and it will give him gravitas in his world. He will sell more books.”

“My first edition of the “Irishman” had lots of errors in it,” said Porrello, laughing. “I didn’t have a professional editor or proof reader, but the book was selling so well that after the third printing, I got almost all of the errors sorted out. It still needs work but we never got to that point. Now we will, because the book is being published by Pocketbooks and they will work with me to polish it.”

Miller and Porrello are executive producers of the film. After our meeting, they were off to the film set to watch as Porrello’s book was made into a movie. With luck, we will see the final result next spring.

Cutline for photo.
Peter Miller, PMA Literary & Film Management, Inc. and Rick Perrollo, author of “To Kill the Irishman,” celebrate the filming of a movie based on Perrollo’s book.

MovieSet said…
Great write-up! Very interested to learn the story of the self-publication of the story and the subsequent negotiations.

After working on the project from a promotion stand-point, we've also enjoyed learning the real back stories and how the actors have gotten to know their real-life counterparts to make a compelling film.

Check out the trove of content from The Irishman at: http://www.movieset.com/theirishman
August 5, 2009 at 5:49 PM

Shondor Birns said…
Having been through the Bomb Wars, from Evangeline Avenue through Big Ange's & Jackie Presser's testimonies to Congress, it is a milerstone to see this project come to fruition. Rick is a first class human being and exudes humility. He's still putting his life on "the line" daily to protect us all from evil. He's proof that Italian Americans are not all "connected". Like some of Italian heritage, He combines music (i.e drumming with big name bands), with lietarture (i.e. first book " The Rise and Fall of the Cleveland Mafia: Corn, Blood & Sugar" through "Superthief"and actively fighting evil and corruption of society.

The movie should be interesting , buit as Rick noted there are mvoies that are classified as "True Stories", "Based on a true story" and "inspired by a true story". The latter being the case for the present film. Walken indicates that you'll see a lot more of "Chris" than Shondor in this film. Walken's sense of humor is wry. My personal wish is for a followup movie to be made on the life of Shon. Having grown up under his tutlage and was saddened when I had heard of his death on Easter morning 1975 when I was away on "vacation". Shon made Green and Don King. He was a man who was a role model in my life. Despite the follies of youth, I've gone on to work in the area of law enforcemenet aand retired into social work helping abandoned and abused children (both Shon and Green were in orphanges, today renamed "residential treatment centers". My point is that the older Hungarian males modelled a genreation of us whose duty remainms to pass this on to our children. Humility (not seen on Green), altruism and self discipline were three b asic tenets. Spirituality ( today's word) was also the most important. Well, that's my comment. Let's see what Detroit offers. Peace.
August 8, 2009 at 8:06 AM

MovieSet said…
Sounds like you have a screenplay in mind, or at least would be someone who could or should write it.

I'll be curious to hear your comments after seeing The Irishman to see how it matches with your memories.

Indeed, listening to the actor's discuss the characters, it's clear their aim is to make en entertaining movie rather than a historical reenactment.

PS Just posted another video today with an interview from the set of The Irishman with Vinne Jones discussing playing a union thug.
August 10, 2009 at 8:10 PM