San Francisco – A Lesson, a Lounge, and possible a Liar

First thing Wednesday morning I found out the hard way that the airlines weren’t kidding about that extra charge for the second bag. That’s right; I paid an extra $25 bucks to transport my bag of hair spray, make-up, safety pins, and misc. girly stuff. Apparently it costs money to live ‘n learn. Okay, lesson learned.

It was noon when I landed; I had lunch at a place near the hotel: kung-pow chicken. Yum. After lunch, I checked into my room, did a bunch of businessy stuff, then headed to the hotel bar to chat with whoever was there and have a nice glass of red wine before the RWA Literacy signing. While at the bar I met Meredith Duran who could not be any cuter. (!) She flattered me by asking my advice for newly published authors; I asked her did she want serious advice? She assured me serious advice would be fine. I think I said something to the effect that 1) authors should not take themselves too seriously and in support of # 1 is 1B) authors should not be too worried about following “the rules.” She was very gracious and nodded politely. Later I wondered if I sounded pompous – and serious. LOL.

The RWA signing was huge, 500 some authors; I sat next to Jocelynn Drake, who was signing her just released first book Nightwalker. I had a great time telling everyone she was my sister; I was still laughing about it later.


After the signing, one of my roommates and I zipped off to the Starlight Lounge a dance club in the historic Sir Francis Drake hotel. There was a bridal party there, so we admired the bride’s dress and fussed over the newlyweds a bit. Also, there was much silliness including:

· Dancing to hipster remixes.
· Talking with some British guy about his company that dashes off to dangerous countries to rescue kidnapped Americans – I know, sounds like a Serious Line but when I asked him if he could drive backwards, as I have heard that that particular skill is essential to such rescuers, he told me he could but not with much skill, I figured maybe he wasn’t making it up. But what did I care anyway?
· More dancing to hipster remixes. 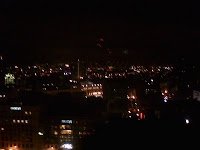 · Taking pictures of the view from the club as seen here.

If you’re looking for somewhere to go dancing that’s casual, I’d recommend it. Around 1:45 my roomie and I headed back to our hotel to tuck ourselves into bed and get ready for day 2.
Email Post
Labels: Conferences humor industry publishing travel writing